The Trust has funded two different but complementary youth wicket-keeping development programmes, each for six years, with Surrey and Hampshire.  The Surrey programme provided high level one-to-one coaching for keepers with the potential to play in the First Class game, whist the Hampshire Cricket Board’s programme helped to standardise the approach to wicket-keeping development for boys and girls across the County.

The Trust first funded an intensive winter training programme for two young Surrey wicket-keepers in 2007/8.  The boys received a full technical, tactical, mental and physical training regime that was delivered by the Surrey Academy coaching staff. 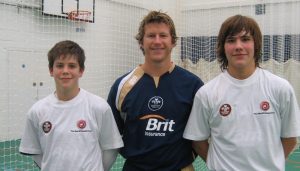 The most beneficial part of the programme was the two young players receiving their technical wicket-keeping coaching from Trust patrons Surrey first team keeper Jonathan Batty and the former England captain Alec Stewart.  Such was its success, the formula was repeated in following years.  The attendees have included Rory Burns, Ollie Pope and Michael Burgess, all of whom have progressed to become professional county cricketers, and we are delighted that both Rory and Ollie have gone on to win their England caps.  Michael and Rory are seen here with Trust patron Jon Batty.

Rory Burns was awarded a two year contract with Surrey in December 2010.  He made three centuries in Second XI Championship cricket and was awarded the 2010 Walter Lawrence Trophy in honour of the 230 he scored for MCC Universities against Oxford MCCU.

He made his first-class debut in 2012, scoring his maiden Championship century and has gone on to score 1,000 runs in a season for five successive years since 2014.  He was appointed Surrey captain in 2017, and in his first game as skipper made his highest score of 219 not out versus Hampshire.  In 2018 he led the side to its first County Championship title since 2002, finishing the season as the Championship’s leading run scorer, scoring 1,359 runs at an average of 64.71.

Rory was selected to tour Sri Lanka with England and made his test debut in Galle in November 2018.

Ollie Pope toured South Africa with the Surrey Academy team in Easter 2013 and was a key contributor to the success of the County U15 side, which won the National tournament later in the year.  In 2016 he was a member of England’s U19 test and one-day squads against Sri Lanka, and made his first one-day appearance for Surrey at the age of 18.

Ollie made his first class debut in 2017 and was part of Surrey’s County Championship winning side under Rory Burns in 2018, scoring 986 runs at an average of 70.42, including four centuries. He made his test debut at Lord’s for England against India in August 2018 after playing only 15 first class matches and in October was awarded the PCA Young Player of the year award. He has also been a regular with England Young Lions. 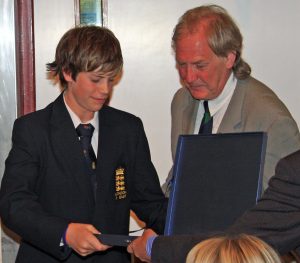 Michael Burgess was awarded the Graham Kersey prize for the best ‘keeper in the 2009 Bunbury Festival at Charterhouse, together with one of the four David English scholarships which saw him spending a week with the full England squad at Loughborough.  He was also selected for the England U15 squad and is seen here collecting his award from David English.  He played for the Surrey County 2nd XI in 2012, and in 2013 trained with the Darren Lehman Academy in Adelaide.

Said Michael “I am very grateful for the coaching I have received.  I have benefitted hugely from the expertise of the Surrey ‘keepers and this would not have been possible without the help and support of the Trust”.

After making his first class debut for Loughborough MCCU and a short spell with Leicestershire, Michael joined Sussex in 2017, where he is a regular member of the team in all formats of the game. 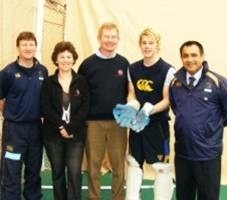 At the programme’s  launch, Hampshire’s Performance Cricket Development Officer, Raj Maru, explained: “Wicket-keeping is a specialist position which has been much overlooked in the past, but the appointment of Bobby Parks as the County’s wicket-keeping coach and the funding from The Ben Williams Trust will enable us to standardise the manner in which keeping is coached, and give all cricketers within the District and County squads the opportunity to benefit from Bobby’s professional experience.  Bobby running these sessions will mean that all our coaches and players would be coached in a similar fashion with no confusion when players move up through the age groups and (hopefully) to the County First XI.”   (Picture with acknowledgement to the Hampshire Cricket Board.)

The programme has been a huge success.  In its first phase, all ‘keepers from both boys and girls county squads benefited from 9 hours of specialist coaching.  As this was the first time many of the players had received specialist wicket-keeping coaching, county coaches saw a vast improvement in performance during the 2009 season.

In the second phase, wicket-keeping development skills were cascaded into district cricket in the County through head coaches.  Bobby delivered hands on training to the coaches for the 10s to 17s age groups, before running three sessions for the district keepers themselves.  By the start of the 2010 season Bobby had passed on his professional experience to approximately 40 young ‘keepers.  The programme’s success was evidenced by the number of ‘keepers who won fielding awards for the 2010 season.

Trust Chairman Phil Williams said: “We are attracted to the Hampshire Board programme because it involves children across a broad range of age groups, and we feel that the coaching of coaches is a particularly good way to make the most of our financial support.  We are delighted to be able to support this initiative and help raise the profile of wicketkeeping in Hampshire Youth Cricket.”